Jérôme graduated from UQAM in Technology Management, has an MBA from the University of Kansas and a Master’s degree in Management from the École Supérieure de Commerce de Clermont Ferrand.

After a stint as a cooperant at CCI France Canada, he began his career in the Canadian banking industry in 1996. His career path then continued between global consulting firms and management positions in Canadian multinationals. Over the years, he has acquired solid knowledge in various areas of the value chain such as strategic planning, operations management, performance improvement, major transformations, Industry 4.0 and mergers and acquisitions. This expertise, mainly developed in the aerospace sector, but also in the agri-food, mining, air transport and manufacturing sectors, has enabled him to lead several missions in North America, Europe, China, India and Brazil.

Today at Mews Partners, Jérôme Darder’s mission is to develop the firm’s activity in Canada and the United States. He will draw on the firm’s expertise and offerings and will accompany his clients on missions in innovation, R&D performance, Supply Chain, Industry 4.0, artificial intelligence and PLM. 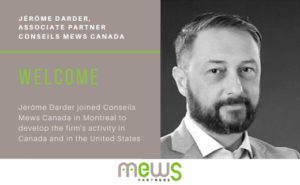 Two dates in Paris and Toulouse!

Managing Partner of our new subsidiary in Canada

Opening of our new office in Montreal, Canada

Mews Partners is expanding into the North American market.

Find out more
Join the tribe